To share your memory on the wall of Charles Laurenzi, sign in using one of the following options:

Charles was born on March 25th, 1942, in Memphis, Tennessee to John Felix Laurenzi and Mary Walters.

He was a long-time resident of the Leipers Fork community in Franklin, Tennessee. This is where he met, and married the love of his life, his "Sweetie", Mavis Bland Laurenzi. They were married on March 17th, 1989, 32 years later, he still had the canceled check from their marriage license.

Summer 2011, he decided that Pensacola would be his final port of call, his family found this odd, due to the fact he hated the beach! but he loved the "Navy town community" Charles always partial to reds, brought his 2 most expensive hobbies along.... his redhead "sweetie", and his red 1962 Chevy Impala. It has jokingly been debated which of these 2 loves was more expensive....

He is preceded in death by his parents, John Felix Laurenzi and Mary Walters; stepson, Scotty Womack; sister, Judy Darling and his niece, Lori Darling Robbins.

So, to our favorite Sailor (other than Popeye) we wish you fair winds and following seas on your final journey home.

A service for Charles will be held on Monday, June 14, 2021, at Trahan Family Funeral Home of Pensacola. Public Visitation will start at 1 p.m. We will be leaving in procession to Barrancas National Cemetery at 2 p.m. sharp for a graveside service at 2:30 p.m.
Read Less

Receive notifications about information and event scheduling for Charles

We encourage you to share your most beloved memories of Charles here, so that the family and other loved ones can always see it. You can upload cherished photographs, or share your favorite stories, and can even comment on those shared by others.

Plant a Tree in Memory of Charles
Plant a tree 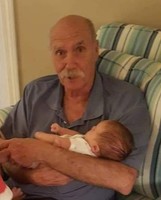