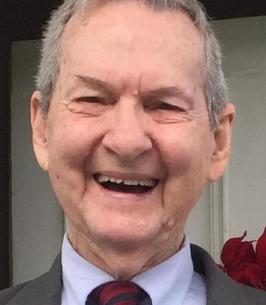 He was a lifelong resident of Pensacola and was born on September 8, 1933. He grew up in the Brent Community where his dad owned and operated Smith’s Barber Shop, grocery store and rental houses.

He attended Pensacola and Tate High Schools. He was the youngest graduate at age 15 from Florida Barber College. He went on to earn his B.A. at Tennessee Temple College; His Masters at Michigan State University; and his PHD at the University of Southern Mississippi. He worked for 32 years at Pensacola Junior College as a Professor and Career Guidance Counselor. Hiram received Jesus Christ as his Lord and Savior while attending Brent Baptist Church as a boy and was baptized soon afterwards. Upon returning to Pensacola after college, he led his family to join First Baptist Church of Pensacola where he became an active member, Sunday School Director, Deacon, Sunday School Teacher and Church Worker. He and his wife Bettye have now been members of Olive Baptist Church for many years where they are also members of the “His Men” and “Mary” Sunday School Classes. Hiram or “Sonny” as he was known by many of his family and friends, was an avid fisherman. Whether fresh or salt water, he was always happy to have either a fishing rod in his hand or a cast net over his shoulder. He was an encouraging, helpful friend to many who knew him and oftentimes went out of his way to help someone in need.

He was preceded in death by his parents, Hyrum and Janie Ruth Smith, his brother Winston Smith, and his first wife, Betty Smith (married 55 years).

A memorial service open to the public will be held in the Chapel of Olive Baptist Church on Saturday, July 23rd, 2022 at 11 a.m. with Dr. Bryan E. Smith officiating.

In lieu of flowers, memorial contributions may be made to Olive Baptist Church.