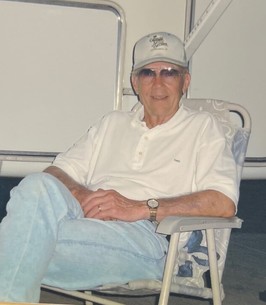 James Henry Workman, Jr. was born July 12, 1927, in Steele, MO and died at home on August 23, 2022 at age 95.
He was predeceased by his parents J. H. Workman, Sr. and Trudy Cecil Barnes Workman and one brother, John Elmer Workman.
James Henry graduated from Steele High School in 1946 and was drafted into the Army and served at the last of WWII in Italy and the Pentagon.
He graduated from Southeast Missouri State College with a BS in Education and moved to Portageville, MO. He was married in 1950 to Florence Hughey and in 1957 they had a son, James Henry (Hank) Workman III. Among his many endeavors he sold insurance, owned two oil companies, several service stations and truck stops, a cattle farm and a development at a lake in MO. He was a very well-respected County Commissioner in New Madrid County, MO for 30 years before retiring in 1995. He was a licensed pilot and owned several small airplanes and numerous motorcycles.
In October of 1977 he married Kathryn Johnson Bond. He & Kathy moved from Portageville to Pensacola, FL in 1995 where they purchased several properties through the years and where they currently reside. They spent many hours on their front porch looking at their beautiful view of Big Lagoon on the ICW.
James Henry is survived by his loving and devoted wife of 44 years, Kathryn Johnson Workman, one son, James H. Workman III (Beth) of Maryville, TN. His stepson, Eric Bond, of the home, who along with Kathy, was his caregiver for the last 2 years. Two grandsons, Cason Henry Workman and Jay Gemberling (Ann) and 3 great grandchildren.
We would like to thank Emerald Coast Hospice for their care of JH the last 2 months. Arrangements are incomplete.