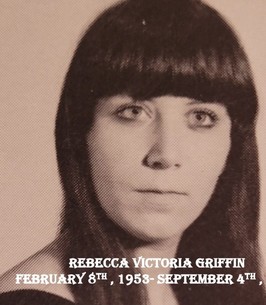 Rebecca “Becky” Victoria Griffin, of Apache, OK formerly of Pensacola, FL passed away on September 4, 2022. A graveside service will be conducted on Wednesday September 14, 2022 at 11:00 AM at Barrancas National Cemetery where she will be laid to rest next to her late husband Steve Griffin who preceded her in death in 1996.

Mrs. Griffin was born in Senecaville, Ohio on February 8, 1953 to the late Patrick Murphy and Betty Wolford Murphy. Becky graduated from Pensacola High School in 1971 and married the love of her life, Steve D. Griffin on June 11, 1971. Everyone knew her to be an extremely devoted and loving wife, mother, grandmother and friend. She loved children with all her heart.

Other than her husband and parents, she was also preceded in death by two brothers; Bruce Murphy and Charles Murphy and Brother/Sister In Law David Griffin and Sue Griffin.

Becky is also survived by nieces and nephews; Lisa, Tammy, David, Brian, Loren, Nicholas, Morgan, Blade, Sai and a host of other family and friends.

In lieu of flowers memorial contributions may be made to the Apache, Oklahoma Historical Society. 101 Evans Ave, Apache, OK 73006 Phone: (580) 588-3392
Facebook:
https://m.facebook.com/ApacheHistoricalSociety

This non-profit organization was extremely important to Becky. Her plans were to volunteer, so she could tell the stories she loved to hear herself.