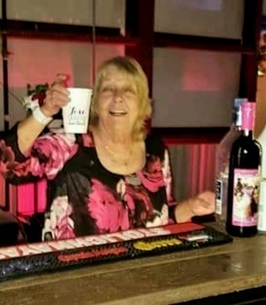 Ruth (Sue, Ma Toad, Granny) Hall, 77 of Pensacola, unexpectedly passed away 22 August 2022. She was born in Tampa, Florida on 12 March 1945.
Mama was fortunate enough to spend the last 49 years with her one true love Bruce "Toad" Hall. They travelled and worked together for most of those years. She ran Navy clubs in Guam, Okinawa, Puerto Rico and Pensacola while he finished his Naval career. In December 1983 they decided to open their own club and named it Toad's Hideaway. In 1992 they decided to retire again. However, Mama was in charge (and bored) so they both got into real estate. Her saavy style and motherly personality shot her to the top of her field yet again. In 2007retirement came knocking once again. This time it stuck. Her favorite past times became playing Bingo and being the matriarch to the family.
She was preceded in death by her mother Ruth, son Michael and brothers Roy, Robert and Jack. She is survived by her husband Bruce "Toad" Hall. Daughter Krissy Hall (Darrell),son Jonathan "Sean" Hersman, daughter Stacie (Jeff) Malone, daughter Christa (Randy) Marlowe, grandson Michael Hall, grand daughters Lauren (Nathaniel) Book and Lauren, Allison and Jordan Malone and Ashley (Kenny) Vanase. Great grandchildren Michael "Max" Hall, Ava Vanase and Dillon, Maddie and Braybe Hall. Life long friends Sue Galpin and Cathy Grosenbach and a host of extended family and friends. No one was a stranger to Ma Toad, they were just a friend she had not spoken to yet!
She will be terribly missed!
A celebration of life will be held September 10 at Trahan Family Funeral Home from 10AM - 2PM at 60 Industrial Blvd., Pensacola, FL. 32503.
In lieu of flowers, please make a donation to the Wildlife Sanctuary of Northwest Florida at 105 N. "S" St., Pensacola, FL. 32505 ( or the "critter" charity of your choice) in memory of Sue Hall. Yes she loved people but she also loved "critters"!