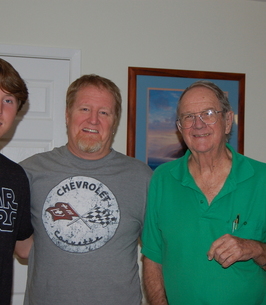 LT. Colonel Stanley Bruce Olson, age 84, passed away peacefully in his sleep on June 27, 2022, after a long illness. He retired after 36 years in the United States Air Force as a mechanic, crew member, maintenance officer and finally as a recruiting officer. He also was a flight instructor in civilian airplanes and flew with the Civil Air Patrol. In his spare time, he ran a Corvette restoration shop. He also was an avid reader as well as built model trains. He and his wife, Judy, were long time members of the Miracle Strip Corvette Club and Trinity Presbyterian Church.

In Lieu of flowers donations can be made to Emerald Coast Hospice or any Cancer fund.

There will be a 11:30 a.m. graveside service at Barrancas National Cemetery held on Friday, July 15, 2022. We will meet at Trahan Family Funeral Home and leave promptly at 11:00 a.m. as we go in procession to BNC.