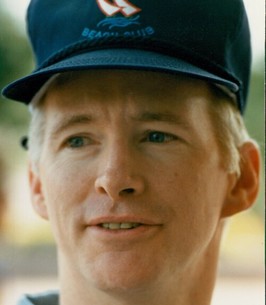 William Homer Moates (Billy), 75, of Cantonment went to be with the Lord on April 20, 2021. He was a retired professor of Management Information Systems and Statistics who retired in Pensacola in 2012.
Billy was born in Enterprise, Alabama (he would say LA – Lower Alabama) on February 5, 1946 the son of Homer and Gladys Moates. He attended Enterprise High School, then received degrees from Birmingham Southern College and the University of Alabama (Roll Tide)! He married his loving wife, Shirley, on December 23, 1984.
Billy received Jesus Christ as his personal Savior and Lord when he was 23. He was a member of First Baptist Church of Pensacola where he was active in teaching adult Sunday School and working with Samaritan Hands benevolent ministry. While a professor at Indiana State University he was also active in the Christian Faculty Fellowship and was on the Board of the City Rescue Mission. He also served as a church elder.
After receiving his doctorate from the University of Alabama he taught at Marshall, James Madison, and Indiana State University. He was an avid golfer and was a member of the Scenic Hills Country Club.
He leaves behind his wife, Shirley; cousin, Bill Moates; brother-in-law, Rev. Glen Bayly; four nephews, Tom, Doug, Mike and Scott Bayly and other extended family.
A Celebration of Billy’s life will be held at First Baptist Church of Pensacola on Friday, April 23, 2021. Visitation will begin at 10 a.m. with the Service to follow at 11 a.m. A Memorial Service and burial will be in Enterprise, Alabama at a later date. Rev. Dave Snyder and Rev. Glen Bayly will preside at the Funeral.
In lieu of flowers, contributions can be made in Billy’s memory to Samaritan Hands c/o First Baptist Church, 500 N. Palafox Street, Pensacola, Florida 32501.