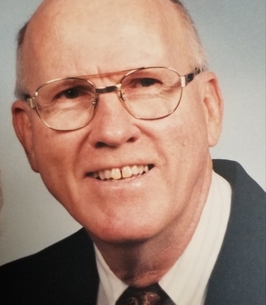 William R. Moore, 90, was born in Pensacola, Florida on September 27, 1932. He left this world peacefully for Heaven on November 7, 2022, at 1:00am. He graduated from Little Flower Catholic school in the very first graduating class in 1947 and graduated from Pensacola Catholic High School in 1951.

He worked at Monsanto as an electrical designer from 1960-1985 and retired after 25 years. In the 70’s, Bill worked as a Reserve Deputy at Escambia Sheriff's Department. After retirement, he thoroughly enjoyed volunteering as “Mr. Bill” when his granddaughter, Emily, was attending at The Small World Kindergarten. He enjoyed 10 wonderful years with Mrs. Emy Bennett at the kindergarten adoring children. In addition, for 20 years, he was a loved and cherished volunteer at Baptist hospital.

Bill married Edna Ingham in 1956 and they were married for 66 years. He loved his adopted daughters Kathryn and Teresa and never missed their school events and attended every softball game. He was a devoted father and loved his grandchildren and great grandchildren. He was a dedicated provider for the family, could fix anything, and enjoyed yard work.

Bill was preceded in death by his mother, father, and four sisters. Bill is survived by his wife, Edna Ingham Moore; children Kathryn and Teresa (Ken); grandchildren, Brandon, Emily, Stashia, and Krystina; and great-grandchildren, Terralynn and Lily; Danny and Leila; and Arik. All of the grandchildren and great grandchildren loved their G-Daddy.

In his final days, he was surrounded by his children, grandchildren, great grandchildren, and friends who loved him. Bill kept a sense of humor through his health struggles over the past four years and was grateful for his caregivers. Edna, his faithful and loving wife, attended to his every need 24 hours a day. Baptist home healthcare and the Regency hospice nurses, especially Pam Martin, were also a blessing during his final days.