To share your memory on the wall of Daniel Ikert, sign in using one of the following options:

Daniel Richard Ikert, 89, of Pensacola, Florida passed away on January 18th, 2021.
Daniel was born on Feb. 11th, 1931, to Donald and Aleta Ikert of Dundee, Illinois. He would be the eldest of 7 children to Donald and Aleta. He became an Eagle Scout during high school. After graduating high school as part of the class of ‘49ers, he worked at Illinois Tool Works in Elgin, Il. Then in 1951, he enlisted in the US Air Force, where he was stationed in both California and Greenland. Dan married Bonnie Rae (Herron) of Ohio, on April 12th, 1952. They had 5 daughters between 1953 and 1962. After his time in the Air Force, he returned to Illinois Tool Works until the time he purchased his own business, Eastview Tool & Dye Manufacturing Co., Inc. After several years, he sold his business and worked for Sherwin Williams Paint Co., Container Division, where he retired in 1988. After raising their daughters in Dundee, and then building and residing in their family home in Algonquin, Il., in 1960, he and Bonnie retired to Sarasota, Fl. until 2001 when they moved closer to their youngest daughter in Pensacola, Fl.

Daniel was Baptized, attended the day school, was Confirmed, and married at Immanuel Lutheran Church in Dundee, Il. He remained an active member there until joining St. John’s of Algonquin, Il in 1960. In his retirement, he and Bonnie were members of Good Shepherd Lutheran Church of Sarasota, Grace Lutheran Church of Pensacola, and finally Lutheran Church of the Resurrection of Pensacola, Fl. Dan fought the good fight against Chronic Progressive Multiple Sclerosis for over 7 decades, with a smile on his face and the Spirit of the Lord in his heart.

Daniel is survived by his wife of over 68 years, Bonnie Rae (Herron); daughters Glenna Calame, Jodi McLynn, Susan Felten, and Leslie Huntinghouse and Son-in-law Frank Kosta. Having had 8 grandchildren, he is survived by 6 of them: Timothy McLynn, Amy Kosta, Frankie Kosta, Taylor Felten, Stephanie (Huntinghouse) Baker, and Danielle Huntinghouse. Dan is also survived by his 6 great grandchildren: RJ, Bailey, Tyler, Teagan and Declan McLynn, and Nevaeh Mae. As well as his siblings Dianne (Dave) Reinert, and Sally (Fred) Noverini, along with 20 nieces and nephews and numerous great nieces and nephews; and his brothers-in-law, Dave Reinert, David Bartelt and sister-in-law Virginia Ikert.
Dan was preceded in death by his parents, Aleta (Reko) and Donald Ikert; brothers, Tommy, who was stillborn, and Jack Ikert, owner of Ikert Plastering; as well as sisters, Elaine Buhrow and Pamela Bartelt; daughter, Jacquelyn “Jacki” (Frank) Kosta; grandson, Thomas Kosta, and granddaughter, Sydnie Felten.

Memorials may be made to Lutheran Church of the Resurrection Mortgage Fund or The National MS Society 8940 Western Way Jacksonville, Fl. 32256.
Read Less

Receive notifications about information and event scheduling for Daniel

We encourage you to share your most beloved memories of Daniel here, so that the family and other loved ones can always see it. You can upload cherished photographs, or share your favorite stories, and can even comment on those shared by others.

Posted Feb 18, 2021 at 02:42pm
This isn’t really a memory so much but rather a regret; I no longer get to have him here to watch baseball with. Saw an amazing movie last night and learned something new about the game and I wasn’t able to share that with him this morning over breakfast. I’m am so grateful and honored to have gotten to spend the last five years taking care of him, talking to him, laughing with him, and yes even arguing and still learning from him. He was a very straight forward and honorable man. We all called him a saint and he truly was. Will love and miss him forever until we meet again.
Comment Share
Share via: 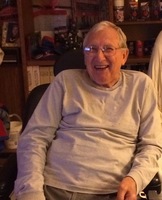